Walter B. Prince has more than 30 years of experience in transportation, commercial law, and civil and white-collar criminal litigation.  A former assistant United States attorney for the District of Massachusetts, Walter’s litigation practice includes business and commercial lawsuits and representation of corporations and individuals in complex federal and state investigations and cases, as well as related civil and regulatory matters.  Walter has represented witnesses who were called to testify before the United States House of Representatives, where the Committee on Standards of Official Conduct was investigating the conduct of a House member.

His experience extends to the investigation and defense of criminal allegations in the areas of accounting, health care, contracting, bank fraud, environmental offenses, and tax and other economic crimes.  In addition, Walter has handled numerous product liability cases and has conducted internal investigations for Fortune 500 companies.

On August 9, 2021, Walter was sworn in as a member of the Board of Trustees of Bridgewater State University, appointed by Governor Charlie Baker.

Walter has litigated and supervised the litigation of more than 60 employment cases for some of the largest employers in Massachusetts and throughout the nation.  Clients have included those in the health care, retail, transportation, financial, and technology industries.

From 1985-1988, Walter was general counsel to the Massachusetts Bay Transportation Authority (MBTA), where he was responsible for managing all litigation brought by and against the MBTA.  With a legal staff of nearly two dozen lawyers, he managed their tort litigation, commercial, real estate, environmental, contract, development, and personnel claims and cases.  In light of his experience and knowledge of the Authority, every general manager and general counsel since 1988 has retained Walter’s services to handle a broad spectrum of legal and transportation matters.  While an assistant United States attorney, Walter was chief of the Major Drug Traffickers Prosecution Unit.  He was appointed by two governors to serve as a member of the Judicial Nominating Council.

Walter sat on the Board of Registration in Medicine for three years and has represented doctors and lawyers in ethics and malpractice claims. He was appointed special counsel to the Massachusetts Commission Against Discrimination (MCAD) and was chairman of the board of trustees of the Massachusetts Health and Education Tax-Exempt Trust, a closed-end, non-diversified management investment company.

Walter is a fellow in the American College of Trial Lawyers and has previously served on several boards, including that of OneUnited Bank. In addition, Walter was appointed to the Boston Bar Association Task Force on the Superior Court Circuit System to review the structure and management of the Massachusetts courts.  He also served on the Boston College Law School Board of Overseers and currently serves on the Greater Boston Chamber of Commerce.

In April 2011, Walter was hand-selected by Senator John F. Kerry (D-Mass) to serve on a distinguished panel of attorneys who were asked to recommend a new judge for the U.S. District Court in Springfield, Massachusetts.  This 10-member committee was also tasked with filling a vacancy in federal court in Worcester, Massachusetts.

In March 2013, Senator Elizabeth Warren (D-Mass) appointed Walter to an advisory committee on judicial nominations to “solicit, interview, and comment on applications for federal district court vacancies in Springfield and Boston.”  The committee’s work was the foundation for Senator Warren’s recommendations to former President Obama.

In October 2013, Walter received the Distinguished Alumnus Award from University of Massachusetts Boston.  This award is presented to alumni who have attained prominence in their professions, demonstrated a commitment to serving the needs of those less fortunate, and exhibited pride in, and support of, the University.  Walter joins a short list of award winners that include Boston Mayor Thomas M. Menino and former Massachusetts Senate President Robert E. Travaglini.

Also in October 2013, in recognition of the firm’s culture of community outreach, diversity, and inclusion, Walter received a “Leader in Diversity” award in the area of Corporate Social Responsibility from the Boston Business Journal.

In June 2014, Walter was appointed Chairman of the Federal Merit Selection Panel for the selection of a United States District Court Magistrate Judge.

In 2016, Walter was recognized as one of the 100 most influential people of color in Boston. 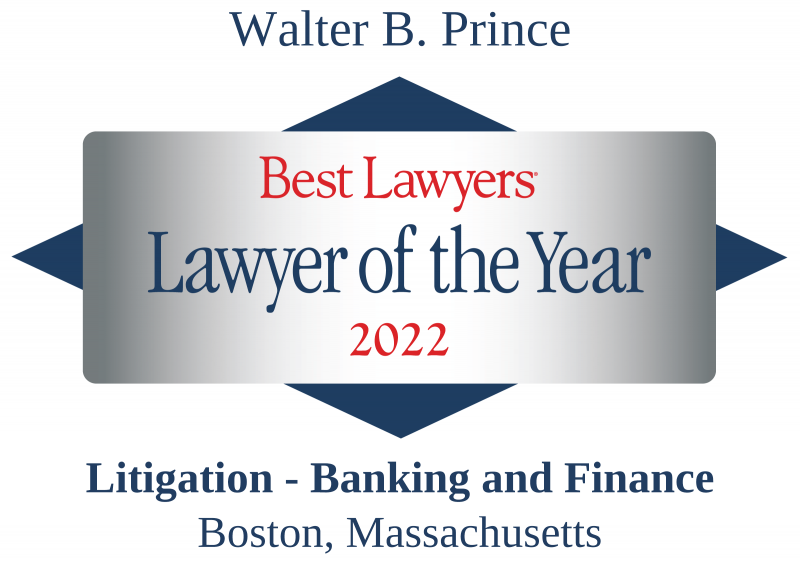 In October, firm founder Walter Prince visited the Roxbury Defenders office.  He notes, "I had…

PRINCE LOBEL RECOGNIZED IN THE BEST LAWYERS IN AMERICA® 2022

Prince Lobel, one of Boston’s leading law firms, is pleased to announce that The Best…